DJ TLR - The Door In The Wall Mix 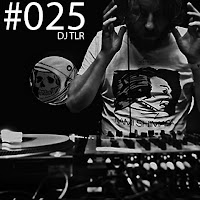 The 25th mix for the Deathmetaldiscoclub series has been mixed by Jeroen van der Star, aka DJ TLR. TLR has been an important key figure in the electronic scene of the The Hague since the early 2000's. He's been responsible for the infamous Global Darkness forum by himself and also co-owns the Godspill mailorder, a mailorder for anyone who wants to order vinyl records that get supported by the members of the Dutch Westcoast. He's also connected with I-F's Intergalactic FM and Guy Tavares' Bunker Records, but really made a name for himself when he decided to start his own label, Crème Organization.

Crème Organization is more than a label, it's a family. A family with a certain philosophy. Crème Organization grew out of the electro/techno/jungle scene in the '90s squat scenes of The Hague and Leiden and it's mostly about proper old-school electro, dark & gritty house and eerie electronics to techno. Some of the records they have put out sound really dirty & sleazy, but quality is always at the forefront of Crème Organization. They have people like Legowelt, Rude 66, Orgue Electronic and Alexander Robotnick on board and they know exactly when one of their records is a Crème record or when it isn't. TLR and his family aren't about over-produced records. They're all about the quality of the content. It's what makes the label a favourite down here at the office. It's what makes the label a highly succesful label worldwide and it's TLR that can be accounted for.

The label has a few nice things coming up. They have just released it's new single by D'Marc Cantu called Alternate Frequency and are about to unleash new singles by Myriad and Innershades. And if that isn't enough, TLR is about to release a new single through the R-Zone sublabel too! Keep your eyes on that, that stuff is really, really wicked. Until then, we hope you enjoy this 25th mix by DJ TLR and we strongly advise you to have a look at his websites below!